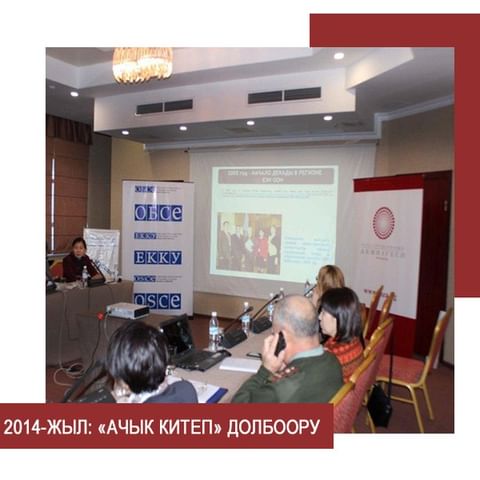 In 2014, the “Open Book Project” was launched to assist in the creation and development of strategies and policies for “Open Educational Resources”, based on existing government education policies.

As a result of the assessment, a draft concept for promoting OER in the Kyrgyz Republic was developed. As an achievement, it can be noted that the term OER was introduced into the "Education Development Concept of Kyrgyz Republic 2020:  Open Educational Resources - teaching, learning or research resources placed in free access, or placed under a license that allows their free use".

The International Conference "Open Educational Resources and Digital Education" was held June 23, 2014. During this Conference, global practices in OER implementation were presented, in particular, information on OER in non-English speaking countries, in Mongolia, Kazakhstan, Tajikistan, Poland, USA, Ireland and the Russian Federation. The results of a study on the prospects of OER implementation in Kyrgyzstan was also presented.

As part of the project, a coalition "For Open Education" was established consisting of representatives of the civil sector, educational and non-profit institutions. The main aim of the Coalition is to develop and promote ideas of free access to knowledge and open educational resources.