"I believe in our Kyrgyzstan" Roza Otunbayeva about coronavirus, NGOs and women in politics 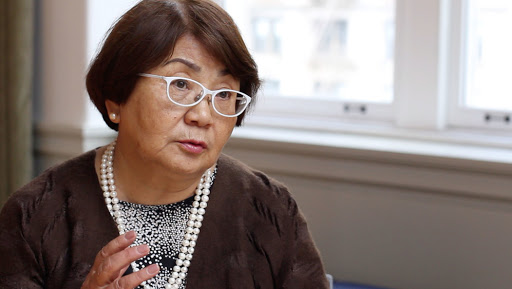 On March 10, former president Roza Otunbayeva spoke at the "Women's Leadership - Breakthrough into a New Era" forum.  She touched upon important issues related to Kyrgyzstan. The editors cite her speech in full.

About coronavirus, poverty and the status of women

In 2016, we celebrated the 90th anniversary of the women's movement in Kyrgyzstan. Since then, there have been big changes and one of them is the coronavirus. I would like to take this opportunity to thank the countries that helped us. Covid-19 has become an ordeal not only for us, but for the whole world. Even the wealthiest countries were confused and did not know what to do. In the United States alone, as we have learned, as many people died during the pandemic as in the two world wars and during the Vietnam War combined.

In the one year since the onset of the coronavirus, we have suffered in different areas: businesses have stopped, people have lost their jobs, and studies have stopped. But the main thing is that poverty has spread. However, those in power do not take the word poverty in their mouths. They do not like this word, although this is openly spoken about in strong China. The news has just arrived that poverty has been finally overcome in the neighboring country! The situation of women has become especially difficult due to the increased domestic violence. It exists all over the world, but especially in Kyrgyzstan.

Our Forum is about how to prevent a rollback due to a pandemic and make sure that we get ahead and keep up with the world. Women have always played, and in this case they must play a leading role in society. I would like to express a few thoughts on this topic.

We must prioritize health and education, among other areas. If we continue to slide downward in these two critical areas, this will, of course, be the end of our status quo, which we had before the collapse of the Soviet Union. It is very important for us today to support our teachers and doctors and find key levers in these areas to bring them forward. I am a member of the Pan-European Commission established by the World Health Organization on development and follow-up after the Covid-19 pandemic. Our commission will soon publish its appeal, action plan and vision on these issues. Although science gives non-optimistic predictions that we may face an epidemic even more difficult than the current one, we must be prepared for them, because we have already received tremendous training. The whole world must stay alert, be circumspect and follow all the rules of hygiene

In Kyrgyzstan, doctors were at their best. Our gratitude and deep bow to them.

Thanks to the doctors, nurses, nurses and all the health workers who pulled us out of this nightmare. People sacrificed themselves and went to the red zone. Why did the doctors do this, but we do not appreciate their work?! You begin to appreciate their work even more, they are still lacking in a number of places in the country. Low wages, lack of government care for medical personnel, training of medical personnel for themselves, low quality of teaching remain a problem.

I would like to be heard by the representatives of the presidential administration who were present: we have 50 universities, of which 20 have faculties or entire universities in the medical field. When will our Ministry of Education start to put a barrier to these quasi-universities that are just makes money? Do they think they are preparing specialists for foreign countries? We are losing our reputation as a state, because these specialists then cannot pass exams in their countries. Even those who do not understand what medicine is, establish medical faculties.

I believe that we must stop and put up a barrier to corruption.

I would also like to say a few words about the non-governmental sector. Some of our members of parliament believe that NGOs should be closed in Kyrgyzstan altogether. When they approve the country's budget, do they already take into account the aid and financial injections of international donors? We have not had another in the past 30 years! The European Union, the World Bank, the German Development Organization and others provide money for textbooks and teaching aids, medical equipment and much more. Thus, without spending huge amounts of money on all of the above, we pay salaries to doctors, nurses, teachers from the budget. In fact, our state has been a grantee from the very beginning.

However the state fails provide all services to the entire population.  Non-governmental organizations work all over the country in every area of social welfare, just like everywhere else in the world, whether developed or developing countries.

Donors provide funds on a competitive basis to the NGO sector, because there is no complete trust in the state and its bureaucratic apparatus. Everyone knows our place in the corruption rating.

About quotas for parliament

We are now discussing the new Constitution, which confirms the presidential rule. Our autocratic neighbors ensured the presence of women in parliament in line with the world average. We are much lower. But it is very hard to believe that in the future the presidential country of Kyrgyzstan will be able to stand on a par with its neighbors.

We will fight for every seat for women! There are many worthy contestants who came from the regions. These are the people who must decide the fate of this country.

Unfortunately, our management is carried out from a position of strength - this is macho-management. The coronavirus was defeated by women, because in our country 85% of those employed in healthcare are women. And women rule with compassion and rationality.

About the control of religion.

A post was launched on the Internet, where in one of the mosques a mullah appeals to believers that celebrating March 8 means going against religion, recognizing those who once ripped off the veil, the holiest clothing of women from their heads (?!) I really ask those in power to take seriously what is called for in houses of worship. Maybe we will wake up tomorrow, and they will tell us: «From now on, you should only wear black scarves»?!

I urge you all to remember how long it took us to get to where we are today. Dear guests, you should know that many women and men who fought for women's rights have died in this country. And today we - women of Kyrgyzstan - hold our heads proudly, talk about women's issues and leadership. I believe that the Kyrgyz Republic will emerge strong from the pandemic, move confidently forward and be together with the civilized world.

More than 1,000 trees were planted to improve the ecology of the capital
"I believe in our Kyrgyzstan" Roza Otunbayeva about coronavirus, NGOs and women in politics
«Women's Leadership - A Breakthrough to a New Era» forum held in Bishkek
Dear Women, Congratulations on International Women's Day!
Winter STEM School opened at KSTU named after I. Razzakov