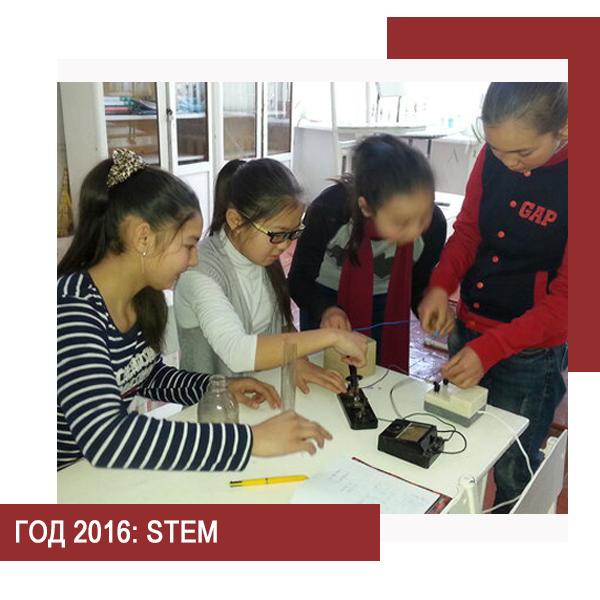 The topic of literacy, in its various aspects, is becoming a goal of many of the foundation's projects. Computer literacy of women and girls, their participation in science and technology, is the goal of the STEM project.

Within the framework of the project, the following activities were carried out during 2016:

On January 11, 2016 winter STEM schools started in five regions of Kyrgyzstan (Naryn, Karakol, Talas, Osh and Batken) with the aim to teach high school girls in exact sciences such as mathematics, computer science, physics, chemistry, which will prepare them to enter technical professions.

In addition, a computer literacy school for female teachers in Batken and Osh was held in January to improve their computer and interactive whiteboard skills. A total of 194 female high school students and 110 female teachers were trained during the winter school.

The Winter STEM School in Bishkek for school girls from newly built schools, held from 26 January to 5 February 2016 at the Kyrgyz-German Technical Institute at KSTU named after Razzakov (KGTU), contributed to a high interest among high school girls and was not able to reach all interested students; therefore, it was decided to hold an additional spring STEM school.

On April 6, 2016, the opening of the spring STEM school was held for high school girls from schools of new residential areas of Bishkek, who received training in mathematics, physics, chemistry, computer science, and received advice on career planning in technical fields from leading teachers of KSTU named after Razzakov.