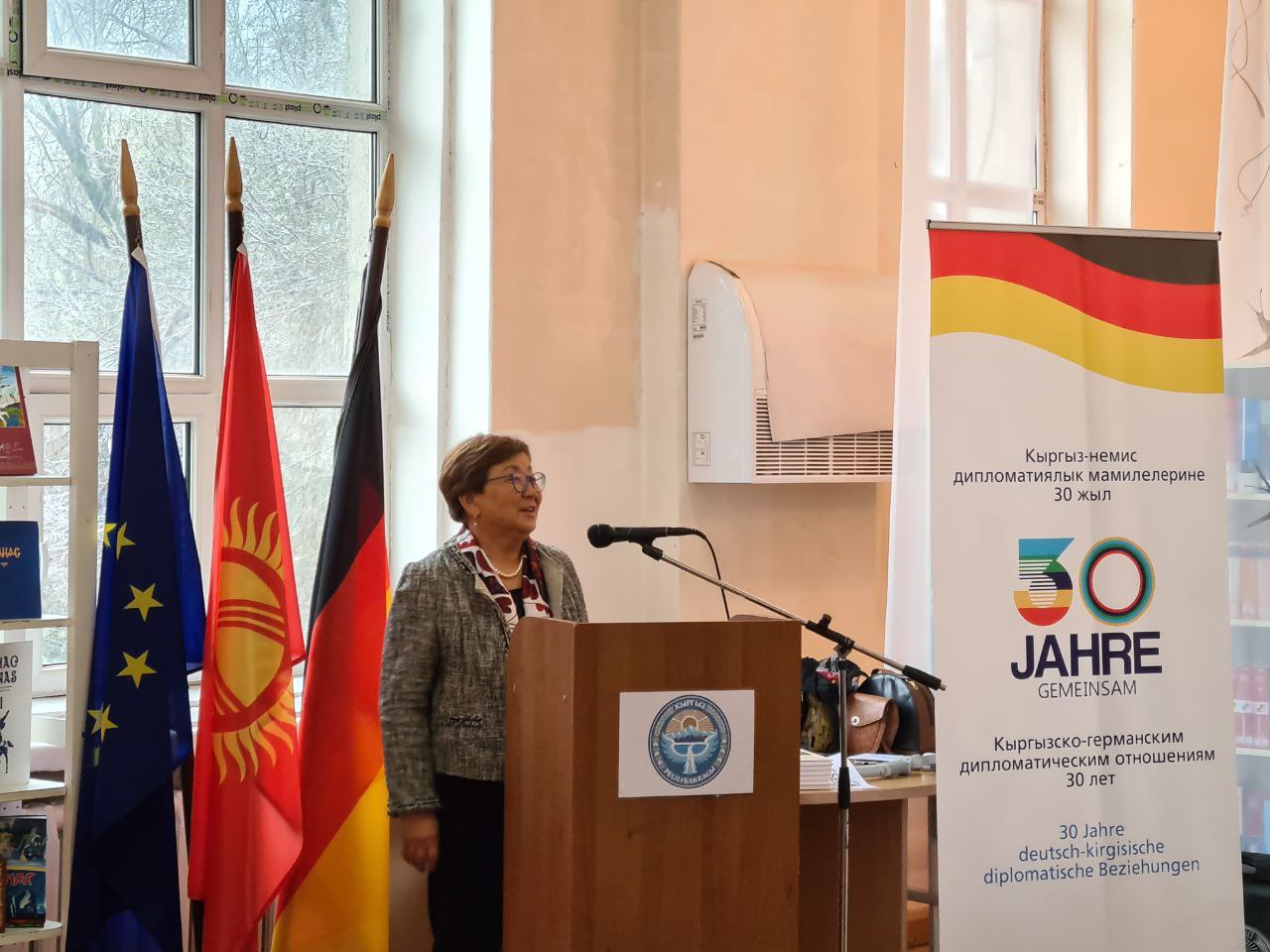 Today, March 29th, the book "Manas in drawings," was launched in the German language. The publication coincides with the 30th anniversary of Kyrgyz-German relations and will allow German-speaking readers to learn about the heroic epos "Manas".

The presentation began with a performance by the Honored Artist of the Kyrgyz Republic, Samat Kochorbaev, who recited an excerpt from the epos Manas.

German Ambassador to Kyrgyzstan, Gabriela Guellil, spoke at the presentation. She noted that the epic "Manas" is a classic work of Kyrgyz literature and a very important part of world culture.

"For those who don't speak Kyrgyz well or even understand it at all, for me the sound of a passage from Manas was like a journey through the mountains of Kyrgyzstan, as I know them. When I listen to the recitation of Manas, it is the eagle that rises and soars in the sky; it is the cliffs that plunge deep down. It is the sounds of the stream. It is the sound of bird voices, and it is the real voice of nature before my spiritual gaze.

This year marks the 30th anniversary of the establishment of bilateral diplomatic relations between the countries.   It is very important for us to further strengthen Kyrgyz-German relations. It is important to acquaint the peoples of both countries with the culture.

We must admit: this was not our idea. "It was a reaction to a proposal by the Roza Otunbayeva Initiative Foundation, represented by former Kyrgyz President, Roza Otunbayeva, who made a proposal to translate the book into German" the ambassador said.

"When I began my work here in Kyrgyzstan about six months ago - and when I first met Mrs. Otunbaeva - she showed me the book, which then existed in Kyrgyz, and it was her proposal: 'Let's try to publish it in German," the ambassador said.

In her turn, Roza Otunbayeva, the founder of the Rosa Otunbayeva Initiative Foundation and former President of the Kyrgyz Republic, noted: "This book is special. It sits in the heart of every Kyrgyz. Manas is a national hero for us today. Manas embodies the unity of all the people. These are the times we live in - divisions, friction and problems.  Manas calls everyone to unity both in the times when we were becoming a nation, and in the most difficult times he has united us all. And when the epos "Manas" will be read by adults and children alike in German, they will imagine how such a small nation that lived in the Altai has moved to the Tien-Shan mountains".

"The idea of this book was to show everything in the language of manga. There is a world practice where complex works are transferred to the language of manga. There's a reason the language is practiced in the world. It's been worked out for the purpose of learning complex works. The Japanese, for example, translated Dostoevsky and Tolstoy into manga, because they are complex works. All these things are read, maybe quickly, but then there is interest. You already know the story line. You go to a movie or a ballet, and you already know what it's about. Later there is a taste and interest to read or listen to this work in full," said Rosa Otunbayeva.

She also reminded the audience that the epos was first recorded by the researcher, ethnographer and scientist - and German by nationality - Vasiliy Radlov.

"I thank Madam Ambassador for her magnificent and effective work. She continued the work of her predecessors and began to strengthen relations between Kyrgyzstan and Germany. There is nothing better if it is culture, and books," Otunbayeva said.