YEAR 2013: The First Festival of Education 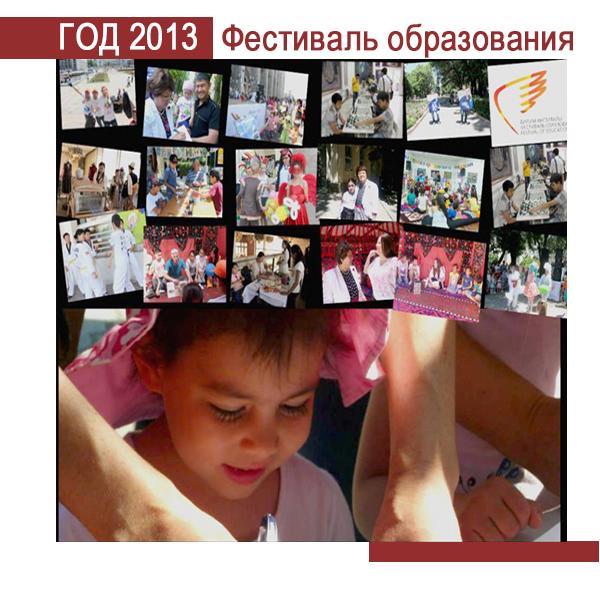 In May 2013, Bishkek residents, and guests of the Capital of Kyrgyzstan, witnessed a bright, unusual, and quite spectacular festival. For the first time, the Roza Otunbayeva Initiative International Education Foundation organized an education festival in Bishkek, which was held under the motto: "To give knowledge is to give future!"

The heart of the city was dedicated to children, their parents, and creative groups. Podiums, improvised stages for performances, and playgrounds, were built everywhere.

Talented children from various dance, music, and even circus groups, held a concert near the Kurmanjan Datka Monument.

Representatives of educational centres, from all districts of the capital, settled in the alley near the Historical Museum. Each table drew the attention of children with its handicrafts, drawings, and toys, made by pupils attending these groups. Among them were wooden planes, beaded flowers, paper houses, knitted toys, miniatures of missiles and tanks, and more.

Beside each workshop there were tables and shelters where children could try making something with their hands. Club leaders were happy to explain to inquisitive kids what to do and how to do it.

Simultaneously, those who love active lifestyles, were also gathering on the square. Cyclists and skaters demonstrated their tricks to kids who love extreme sports. Graffiti artists mesmerized the public with their skill to make a masterpiece on the wall with the help of some colored spray cans. Climbers invited children and adults to test their adrenaline by climbing up a training wall.

The education festival featured a unique, in content and scale, an exhibition of educational services, both paid and free of charge, where various children's and youth centres, studios and clubs, were presented. All professional lyceums in Bishkek organized a "City of Craftsmen". Also, the citizens and guests visited an exhibition and sale of educational games for children, children's furniture and clothes. There was also a charity fair of products made by orphans, pensioners and people with disabilities. These included stuffed toys, various household items, figurines and decorative items made of clay and bronze, as well as mini-carpets, felt carpets and other items.

One of the Festival's highlights was the Book Bazaar, a book fair featuring the country’s leading publishing houses, while children's writers and poets read their poems and talked with readers and admirers of their talent. And in the gallery of the Oak Park, there was an event called "Stars Who Read to Children", during which well-known personalities - actors, TV journalists, politicians, artists, heads of big companies - read books aloud to children.

Fascinating shows and developmental workshops, offered by the organizers and participants of the festival, were appreciated by children and adults alike; and the Education Festival was a great opportunity to combine the interests of children and parents. It helped every child find an activity to their liking, and it helped parents to find out what their child is interested in.