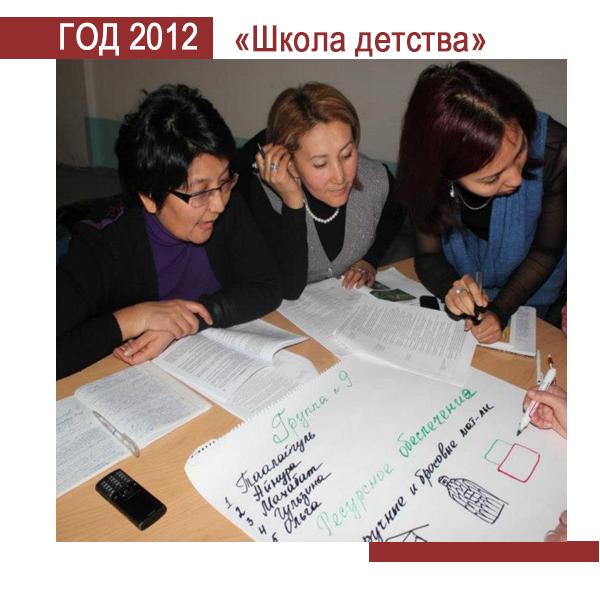 The "School of Childhood" initiative was launched in October of 2012. It was a series of regular open lectures and trainings for parents, teachers, educators, psychologists, students on education, practices and existing innovative methods of education and early development of children. The project was unique in that the lecturers were not only leading teachers and methodologists of Kyrgyzstan but also invited experts from Russia, Austria, Italy, Germany and other countries with advanced educational technologies.

The initiator of the “School of Childhood” was the founder of the Foundation, former President of the Kyrgyz Republic, Roza Otunbaeva.

"For many years we've been waddling around in a market economy and the basics of democracy, and we've missed out on a generation. It turns out that our children are not socialized and do not know how to communicate with each other. But kindergartens are meant to prevent interracial conflicts and crime," she said at the opening.

The first lecture of the “Childhood Schools” was devoted to Waldorf pedagogy. Wolfgang Auer, from Germany, and Olga Starostina, from Russia, talked to Kyrgyz educators about this method of education.

The second lecture, "The Montessori System: Every Child is a Genius", took place in November and continued in the form of a five-day training session. From November 19-23, 2012 in Bishkek, training in Montessori Pedagogy was held by the Director of the International Institute of Montessori Pedagogy Nadejda Smirnova, who is one of the recognized Montessori educators not only in Russia, but also abroad. During the week, 73 participants, including teachers and heads of preschools, psychologists and parents, learned the basics of Montessori pedagogy.

The theme of the third lecture was equally as interesting and topical: "Methods of using yoga (ashtanga, kundalini), qigong, and tai chi chuan techniques to improve the psychological adaptation of children in primary school".