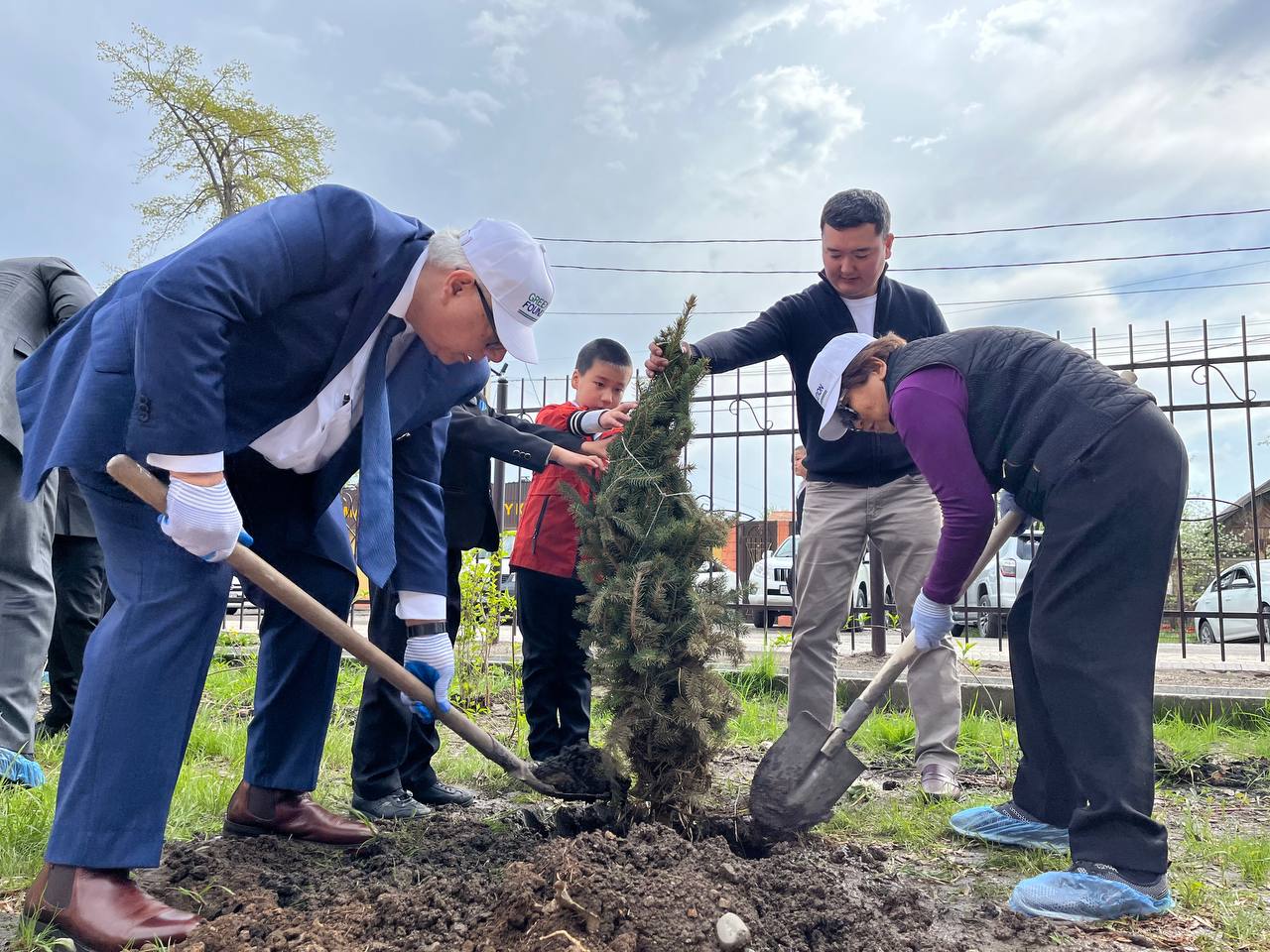 The aim of the action is to increase environmental responsibility among children and young people and to create a favourable microclimate on school territories.

This year's tree planting was timed to coincide with the 10th anniversary of the Roza Otunbayeva Initiative IPF and was attended by former President of the Kyrgyz Republic Roza Otunbayeva.

For many years, the Foundation has paid special attention to environmental education and early childhood development. During the anniversary year, the Foundation plans to implement several projects, one of which is planting trees and shrubs.

In her speech, former President Roza Otunbayeva said that over the past years the Roza Otunbayeva Initiative Foundation, together with its partners, has carried out landscaping work in 85 schools and kindergartens across the capital city.

"Now, we live in challenging years, a very turbulent time on the planet. We, here in Kyrgyzstan today, are planting trees. It's such a peaceful and beautiful activity. We should always be building schools, raising children, and planting trees. Peace is the most precious thing," said Roza Otunbayeva.

The event was organised jointly with the Education Department of the Bishkek City Mayor's Office at the initiative of the Kyrgyz Investment and Credit Bank (KICB).

"Every year, together with ecologists and experts, a tour of educational institutions in need of planting greenery, is conducted. So, this year seven educational institutions were selected for planting tree seedlings, and today the planting is taking place simultaneously in schools and kindergartens of Bishkek. We hope that the seedlings planted today will take root and already next spring, thanks to proper care, will delight the children with greenery. It is not a coincidence that we plant trees at schools. By planting and taking care of them, we teach children from an early age about respect for nature and environmental values", said Ali Arif, Chairman of the Management Board of Kyrgyz Investment and Credit Bank CJSC (KICB).

The Kyrgyz Investment and Credit Bank (KICB) initiated a tree planting and conservation campaign by establishing the "Greening Fund" in 2012.

It should be noted that the President of Kyrgyz Republic, Sadyr Japarov, signed a Decree "On declaring 2022 the Year of Mountain Ecosystems Protection and Climate Sustainability", which aims to enhance climate sustainability, preserve natural heritage, and celebrate the International Year of Sustainable Mountain Development.

As part of the campaign, the Foundation will plant local varieties of saplings: conifers, deciduous trees, and shrubs in five schools in Bishkek. Schools Nos. 16, 3, 88, 81 and 96 have been selected for tree planting.