Year 2014: "Promoting a National Policy on School Meals in the Kyrgyz Republic" project 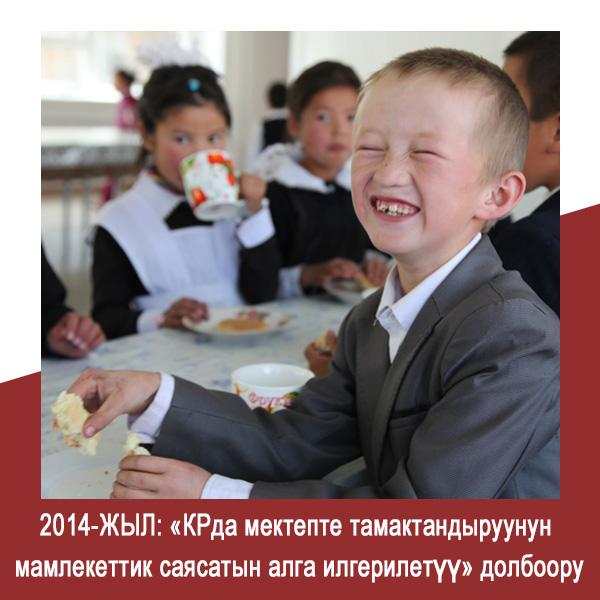 "School meals should be able to reduce social inequalities. On the one hand nutritious food is provided, and on the other hand, parents who have more opportunities should  help poor families. There are many families where children grow up half-starved, so it's hard to overestimate the importance of school meals".

The following activities were carried out as part of the project:  Organising and conducting qualitative research to establish the level of public awareness of school nutrition among pilot schools, parents and local governments.  And, organization and carrying out of cooking master classes in Bishkek and Jalal-Abad cities, activities covered more than 1200 people, including 900 children.

As part of the project, 18 training seminars were conducted in six regions of the country to strengthen the capacity of school administrations, parents, local communities, journalists, members of local councils, and representatives of local authorities, which reached more than 600 persons. The content of the trainings focused on improving understanding of the importance of hot school meals, how school meals are financed, contributions local authorities, parents, and entrepreneurs can make to introduce hot meals to schools, and how children's rations can be diversified and menus can be enriched with inexpensive foods.

A study tour of members of the Parliament to Jety-Oguz, district of Issyk-Kul region, was organised to familiarise them with the pilot programme of school catering optimisation.

A seminar for journalists was held to raise awareness about the importance of school nutrition and improving its quality.

Booklets and leaflets for parents on improving the quality of nutrition for children were prepared and published.

On 18 December 2014, the Roza Otunbayeva Initiative Foundation, held in Bishkek, an open master class on "Bean and Pumpkin" on preparing dishes from beans and pumpkin. The workshop was supported by the UN World Food Programme in the Kyrgyz Republic and held in partnership with the Turkish Embassy in the Kyrgyz Republic, the Kyrgyz-Turkish University "Manas" and the "Tyubeteika" restaurant-club.

The project has a number of positive examples of allocation of funds from the local budget for school meals. Awareness has been raised on the importance of introducing hot school meals in the pilot regions.

Over 25,000 people have been reached through the dissemination of information in one year, using media and internet. A series of 11 TV and six radio programmes, publications in newspapers and internet portals - all these measures were aimed at increasing awareness of the school meals topic, raising public awareness of the importance of hot meals, its variety, implementation mechanisms, funding system, etc.