Dedicated to the 10th anniversary of the Foundation: The year 2014 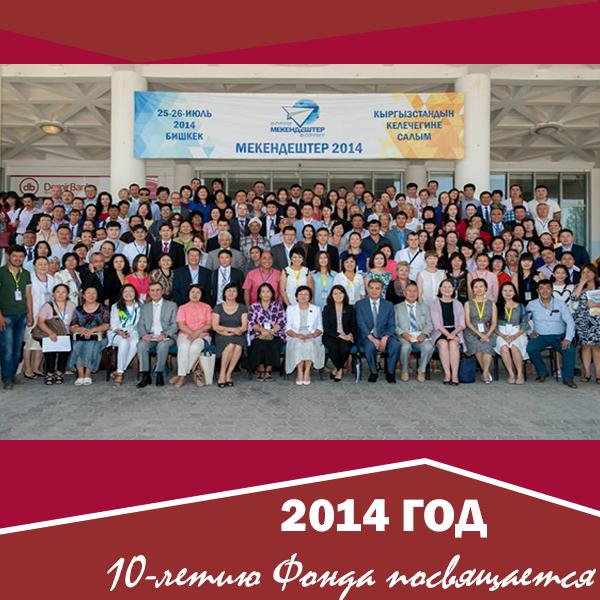 By 2014, the Roza Otunbayeva Initiative International Public Foundation had already become well known, and many of its activities had become beloved by residents of the capital Bishkek. The Roza Otunbayeva Initiative IPF had earned itself a reputation as a reliable partner. The focus was again on the development of education and the early development of children; the environmental education; the development of culture; and growth of the potential of girls and women, and the unification of compatriots living abroad.

The lectures, "School of Childhood" and the "Open Book" project, the Second Festival of Education, and the "Promotion of Early Childhood Reading" project, were all aimed at supporting and developing the education system. Much work was done in the framework of the new project, "Promotion of Public School Nutrition Policy in the Kyrgyz Republic".

A new development in 2014 saw the initiative, "Kindergartens in Jailoo", and a weekly radio program, "Genius", with the motto, "Every child a Genius", was launched on the country's radio airwaves. A grandiose music and education project, "Music is the Soul of the People", was initiated and carried out. Active cooperation between the ROI IPF and the country's museums has begun, and exhibitions titled "Germans in the History of Kyrgyzstan" and "Dolls from the Past" have been organized. In addition, a presentation of "The Kyrgyz in the Pamirs" by Janyl JusupJan, a well-known radio documentary filmmaker, winner of the AIB international prize, photographer and journalist of Radio Azattyk, and a visit to Bishkek by Yan Yaya, one of China's top ten artists working in oil painting, were organized. The "Stars Reading to Children" and "Poetry Evenings" initiatives continued.

The second "Mekendeshter Forum"; the "Discover Asia - New Format" initiative; the "Ustat-II" mentoring project; the conference "State Accountability to Society and Citizen Participation in Good Governance"; and “Dialogues on Parliamentarianism”, were all aimed at building and deepening the dialogue between the authorities and civil society.