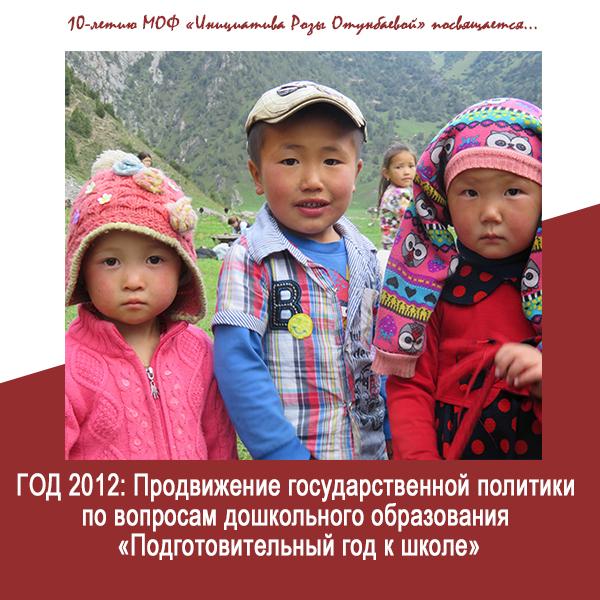 Supporting the development of education with a focus on pre-school education was one of the Foundation's significant initiatives in 2012.  In 2012, only about 13% of the country's children were enrolled in pre-schools, with only 5% in rural areas.

The main goal was to promote a compulsory one-year school preparatory programme for children aged six who did not have access to pre-school education.

In addition, the Foundation had worked to disseminate knowledge and an understanding of the importance of early education, to share experiences within the country, and to train educators and teachers.

In order to raise awareness among citizens and members of local communities about the importance of pre-school preparation for children aged six who did not attend preschool, the Foundation team, led by former President Roza Otunbaeva, held meetings in the villages of Naryn, Talas, Batken, Issyk-Kul and Chui regions and in Naryn, Talas, Batken, Suluktu, Balykchy and Karakol cities, the capital Bishkek and residential areas around Bishkek. During the visits, the importance of including affordable and quality preschool education in local development plans and identifying alternative solutions to expand pre-school education programs was highlighted.

At the initiative of the "Roza Otunbaeva Initiative", and with the support of the Jogorku Kenesh Committee on Education, Science, Culture and Sports, parliamentary hearings - "Every Child Needs an Accessible and Quality Education" - were held on November 23, 2012 in the conference room of the Jogorku Kenesh. Deputies from the Jogorku Kenesh, members of the government, educators, and civil society representatives, participated in the hearings with a total number of over 200 people. Based on the results of the parliamentary hearings, a decision was made and sent to the committees of Parliament and the Government of the Kyrgyz Republic.

In general, the decision was aimed at introducing a mechanism for implementing the annual pre-school training program (480 hours).

·         Cost estimates of 480 hours of preschool preparation of children were made with description of methodological approaches and justification of calculations in the section of the summary analytical report. Various options for calculations to implement the 480hour program were also developed and agreed upon with officials from the Kyrgyz Ministry of Education and Science and the Ministry of Finance.

·         The Government has made commitments under Article 35 of the Law of the Kyrgyz Republic "On Education" when developing the draft Law of the Kyrgyz Republic "On Republican Budget in the forecast for 2014-2015" to provide funding in a separate line for the implementation of the mandatory annual (480 hours) program to prepare 100% of children of six years of age to school from September 1, 2014.

·         The Parliament and the Government of the Kyrgyz Republic were provided with the results of the calculation of the annual school readiness program.

·         Recommendations for the annual school preparatory program were readily accepted at the parliamentary hearing by the Education and Budget Committees of the Parliament;

·         Children aged six who did not attend pre-school educational institutions would have the opportunity to study for an equal starting opportunity when entering the first grade;

·         Introductory visit with UNICEF on the experience of establishing community kindergartens in Batken region;

·         Awareness of citizens and community members of the importance of preschool education has increased;

·         In 2015, the Ministry of Education and Science developed and approved the "Nariste" (baby) school preparatory program for children (480 hours); and already in 2016, 3053 classes were opened in Bishkek alone under the "Nariste" pre-school preparation program.