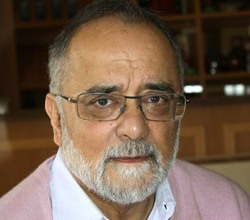 In Kyrgyzstan at the invitation of the Roza Otunbayeva Initiative International Public Foundation, renowned Pakistani journalist and author of books on Central Asia Ahmed Rashid spoke with AKIPress on March 30.

- Will the Taliban seize power?

- No, I don’t think the Taliban will seize power. I think that the current political transformation, or rather the presidential elections, the resignation of President Karzai and the election of a new president, is extremely important to peace and stability. The question of political transformation is whether Afghanistan can have a peaceful change in government without shocks. Unfortunately, there are fears that the elections will be rigged. If so, then it will increase the tension between various political groups. Of course the Taliban will try to take advantage of that. I believe though that there is peace possible with the Taliban faction that wants some truce and power-sharing agreement. They are tired of fighting; they have been [fighting] for almost 30 years. They don’t want to be refugees. At the same time, there is a younger generation of fighters and commanders who are still eager to fight and to gain power.

Thus, in the short term, the Taliban will not be able to seize power. The Afghan Army is 300,000 strong and is quite battle-worthy. Maybe not long term, but at least right now that will be enough to restrain the Taliban. My hope is that the elections will initiate a dialogue.

- Some in Central Asia predict the situation will deteriorate and instability will spread throughout the region after the withdrawal of the US Army in 2014. Is this a justifiable fear?

- Existing extremist groups in Central Asia like the Islamic Movement of Uzbekistan (IMU) have become stronger after September 11. They have the support of the Taliban in Pakistan and Afghanistan. Now they are gaining fighters from all over Central Asia, not just Uzbeks or Tajiks. There are Kazakhs, Kyrgyz, Caucasians, Uighurs from China. They have become a pan-Turkistani group. They fight with the Taliban against the Americans. They have combat experience. Now they are helping al-Qaeda and other groups in Pakistan. In this regard, they have become stronger.

That said, I still think it will be difficult to break into Central Asia. These countries’ borders with Afghanistan have become much better protected.

However, the real danger to CA comes not from these extremist groups, but from within the CA countries themselves. Will the governments of Uzbekistan and Tajikistan be able to enact stability and economic reforms to ensure a good relationship between the state and the people? If they fail to do so, then these groups will be stronger because there is no democratic alternative. So it all depends on whether those governments can improve governance, reduce corruption and provide more economic benefits. Therefore, if CA countries become mills of internal instability, economic collapse and repression, then these groups will take advantage of that.

- How do you explain the fact that after the US invasion Afghanistan beat the record for heroin production, and that Russia and China were the largest consumers of heroin?

- First of all, the Americans, who have spent billions of dollars, have not invested in agriculture. Afghanistan’s economy is totally based on agriculture. The peasants had no choice but to grow opium poppies which are much more profitable. The resurgent Taliban began to protect these farmers and have consequently become very popular with them.

Then, through there connections with the IMU, they began to encourage the export of heroin through Central Asia, and from there to Moscow, Eastern and Western Europe. The fact that the majority of heroin went through Tajikistan and Uzbekistan demonstrates the good relationship between the Taliban, al-Qaeda and the IMU.

- In the new Great Game, are pipelines still relevant?

- Yes, especially the pipeline from Turkmenistan to Afghanistan, Pakistan and India (TAPI). The problem, as in the 90’s when the Americans wanted to build a pipeline, is the absence of peace in Afghanistan. Nobody will invest billions of dollars if there is a risk of instability, and if the Taliban can blow up the pipeline at any moment. The need for peace in Afghanistan is enormous.

- Great powers compete in CA. The US is promoting the New Silk Road. Last year, China proposed developing part of the Silk Road, while Russia has its military presence. Basically we are talking about energy resources. In your opinion, is the deteriorating situation between Russia and the West only about resources, or does it also have an ideological component Cold War?

- I hope that the relationship between the West and Russia will return to normal. I think that China is becoming an important player in the new Great Game. The influence of that country in Central Asia is growing all the time. Russia does not have such a broad economic presence. It depends on oil and gas exports to Europe. China exports to all Asian countries. We will also see the US retreat. I do not think that the US will remain a major player in Central Asia. We will see China on the offensive, and Russia will no longer play the role it played before. It can’t simultaneously constrain the European community in the West and China in the east, so it will have to compromise.

The Great Game will continue. We will see new players, like India. Iran will also play a large role in Central Asia and Afghanistan. It will become more complicated.

- In your opinion, will there be a rise of political Islam in Central Asia?

- In countries where democracy and political parties are not allowed and there are no alternatives there will always be the danger that opposition will go underground and become radicalized. This is what happened in Tajikistan and Uzbekistan with the Islamic movement. I think that the governments in CA could benefit from the traditions of Sufi, a more deliberate and moderate brand of Islam. Of course, for that, [Sufism] will have to have more support from the state and from political groups. It’s a good protection against religious radicalism, though, and we need to maintain moderate currents of Islam. Besides, Sufism is rooted in Central Asia.

On the other hand, without political freedom, radicalized islamists will begin an armed struggle. I think that in this respect, Kyrgyzstan has done a lot of good, because in this country you can freely express political and religious views.

- Currently, almost every village in Kyrgyzstan has a mosque. Many of these are under the effective control of the Tablighi Jamaat movement, which has roots in Pakistan. Some neighboring countries have banned the movement. In your opinion, how will the growing influence of Tablighi Jamaat affect the politics, security and future of this country?

- This is a non-political movement. However, in Pakistan we have seen that many of the ideas of Tablighi Jamaat implemented by armed groups such as al-Qaeda. So for them it is easy to spread influence. Although the Tablighi itself is a peaceful group, not political and not armed, they themselves are innocent [of what the armed Islamic groups have done]. I do not think that the Tablighi itself is dangerous.

- Do you think the government should ban this movement?

- No, I think that would make the situation much worse because they would immediately go underground. Islamism cannot be defeated by repressions. Nations must adapt themselves to it. The state must be strong enough to keep Islamic groups from becoming violent. Governments must control their financing and the supply of weapons. Therefore, the state should not allow political groups to be funded from abroad. In Pakistan, we were not able to control the supply of weapons nor could we prevent foreign funding, so we have witnessed the flowering of a variety of religious groups including the Taliban, al-Qaeda, anti-Shia, anti-Christian, etc.

Therefore, you should not try to destroy these groups; you need to prevent them from becoming violent by controlling their supplies of money and weapons. In this regard, the state must be strong.

Background. Ahmed Rashid is a renowned Pakistani journalist and author of several books on Afghanistan, Pakistan and Central Asia. He was educated in the UK. He is the author of “Taliban: Militant Islam, Oil and Fundamentalism in Central Asia.” More information can be found at his website, http://ahmedrashid.com