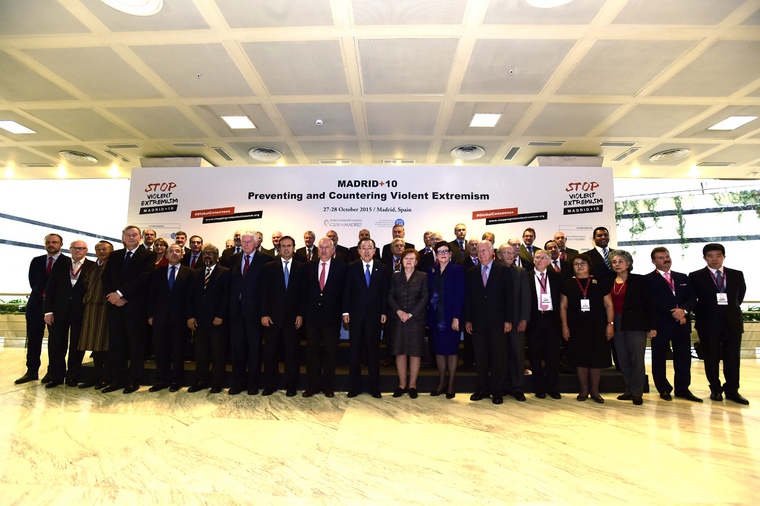 On October 27th-28th in Madrid, the world’s largest global forum was held. The forum’s topic was “Madrid plus 10: preventing and combatting violent extremism,” and focused on multiple related themes. Over 40 members of the Madrid Club, which included policy makers, scientists and NGOs, gathered for the event. Spain’s King Felipe, UN Secretary General Ban Ki-moon, Spanish Ministers, and Madrid’s Mayor all delivered speeches at the Forum.

It has been ten years since the March 11th, 2014 train bombings in Madrid, the terrorist attacks that killed 191 people and injured 1800 others. The world has seen strong, comprehensive efforts in the fight against terrorism; however, as the following decade has shown, terrorism has not stood idly by. In fact, terrorists have been active, garnering the support of communities, and moving freely in local society. Departing from the usual forms, they are now disseminating violent ideas through the use of new technology, making efforts to strengthen their fight by recruiting women (up to 30 percent of those called to fight are women), and continuing to gain the support and sympathy of youth. Efforts from the likes of Da’esh, or ISIL, Al Shabaab, and Boko Haram have stunned the world.

Neither international organizations nor national governments have been able to establish policies to stamp out terrorism. People are unsure what to do in their own societies; everyone seems to be doing what they think is best for themselves. Policies in the fight against extremism today do not come close to being successful or effective.

It was determined at the Forum that extremist religion, ideology, a lack of shared national identities and the entanglements this can create, are not able to explain terrorism. These are simply excuses for explaining the current distress. Extremism is a symptom of the trouble, not the cause. ISIL was created in reaction to the dictatorship regimes in the region over the past 20-42 years. This is an extremely cunning, well organized, high-budgeted, disciplined and well-funded war machine. No one the world over—both well developed Western nations and developing nations alike—have any idea what to do, and they are not being able to find effective steps to prevent the active recruitment of young people to Syria. What is it that attracts youth and women with young children to a jihadist front? What is it that compels people to leave en masse to war—to leave their wives and husbands and families in financial need—and to go to an unknown land that is not their own to sacrifice their lives? The grief of Syrians is overwhelming: four million refugees, six-and-a-half displaced within the borders, close to two million refugees in Turkey alone, more than 1.1 million refugees in Lebanon, 700 thousand in Jordan, and more than 700 thousand fleeing to Europe. This is the largest refugee crisis in Europe since World War II. To date 28 of the UNHCR member countries have established their own plans for relocating refugees from Syria. It must be noted, however, that of the people making these incredibly difficult journeys under these circumstances, up to 90 percent are staying in their own countries. It is distressing that UN organizations dealing with this great crisis only have 42% of the necessary funds.

It was said at the Forum that the refugees are comprised of many women and children. These refugees don't only bring crisis—they also have great potential; many of the Syrian refugees are highly educated. It is especially important to create good relationships with youth: they are equipped with new technology and their role and place in the world have grown decisively. Social networks in their massive horizontal communicative abilities have toppled the verticle power structures of great-and-small and parent-child. The Forum participants said that neither the international financial organizations nor the UN have strategies for working with the youth. The UN Secretary General responded to this by saying that in the near future, the UN will be presenting their plan for preventing violent extremism on the global, regional, national and local levels. The plan will have special consideration given to youth.

War can only be waged against violence and extremism with concerted effort and unity and planning for many situations, while leaning on right principles. Leaning on societies, working together with religious leaders, and actively involving the non-governmental organizations—these are the core principles of success.

The European Union, OSCE, and several governments support the implementation of projects in various places that work against and eliminate violent extremism and radicalism.

The following are a few addresses of projects we have been able to join with:

- Global Community Engagement and Resilience Fund, finance in part by the Swiss Private Foundation together with Geneva: www.gcerf.org

- The Hedayah International Center of Excellence for countering violent extremism, with the UAE: www.hedayah.ae