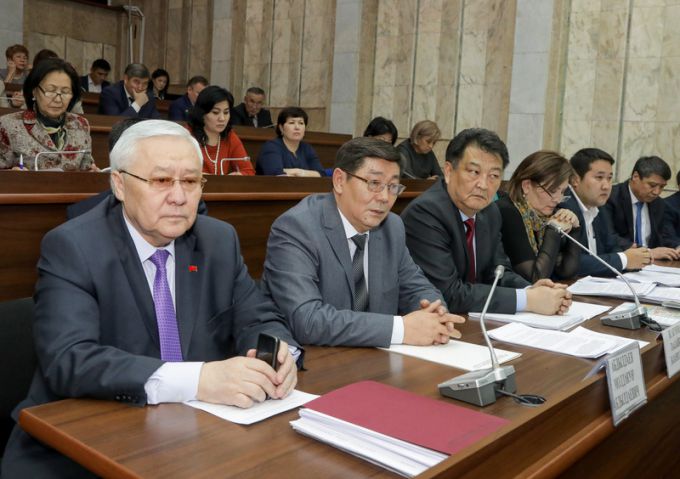 A meeting of the Committee on Social Affairs, Education, Science, Culture and Health of the Jogorku Kenesh of the Kyrgyz Republic was held on December 25, 2017.

It was attended by 11 members of the Committee, Minister of Education and Science G. Kudaiberdiyeva, Minister of Health of the Kyrgyz Republic T. Batyraliev, Minister of Finance of KR A. Kasymaliev, Director of the Agency of Local Government and Interethnic Relations Saliev B., President of the Kyrgyz Academy of Education A. Mamytov, the head of the UNICEF office in the Kyrgyz Republic Yukie Mokuo and experts, representatives of international and public organizations. The event was moderated by the Committee Speaker, G. Moldobekova.

Session participants first discussed the issue of promoting "Basic Standards of the Development of Children from Birth to Three Years" and "Diary of Development of Children up to 7 Years". This event was initiated and organized by the "Roza Otunbayeva Initiative" International Public Foundation. During the meeting the deputy of the Jogorku Kenesh A.Kasymalieva noted the importance of the development of children at early age and invited her colleagues to examine Basic Standards and the Diary.

Deputy Chairman of the Committee on Social Affairs, Education, Science, Culture and Public Health of the Jogorku Kenesh of the Kyrgyz Republic noted the importance of investing in the future, in his opinion, "fruits we are going to reap" depend on this. Deputies E. Strokova, N. Nikitenko, S.Sher, A.Zhaparov also noted the importance of such documents on the early development of children due to the fact that many parents are not aware of the elementary norms and rules of raising children at early age. To promote these documents, the people's representatives proposed to shoot a number of video for further broadcasting on the ElTR and KTRK TV channels. Also it was proposed to distribute "Diaries" to low-income families for free.

During the meeting, the head of the UNICEF office in the Kyrgyz Republic, Yukie Mokuo, stressed that investing in children is one of the directions in reducing poverty in any country.

The Executive Director of the ROI IPF D. Kendirbayeva noted in her report that "the future of any state is built on human resources". In her opinion, the further development of their personality depends on the quality of the early development of children.

As a result, the deputies of the Jogorku Kenesh unanimously supported the issue of replicating and disseminating the "Basic Standards for the Development of Children from Birth to Three Years" and the "Development Diary of Children under 7". After, they gave a number of instructions to representatives of state bodies.