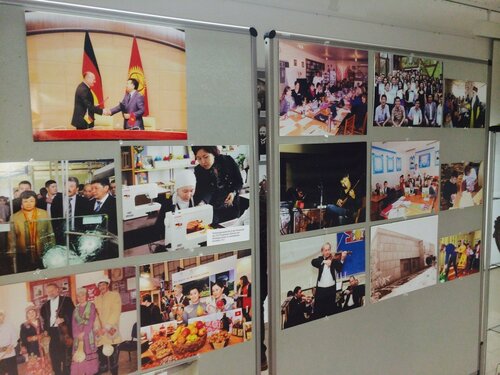 The opening ceremony of the exhibition “Germans in Kyrgyzstan’s History” was held November 8th, 2015 in Detmold in North Rhine-Westphalia with the assistance of the Kyrgyz Republic Embassy in Germany. It is a perfect continuation of the October 3rd, 2014 exhibition in Bishkek, “Germans in Kyrgyzstan’s History,” successfully organized by The “Initiative of Roza Otunbayeva” Foundation, the German Embassy in Kyrgyzstan, and the Kyrgyzstan German Advisory. Like the previous exhibition, it was organized by the Embassy with the support of the German Federal Government department for migrants and minorities authorized representative H. Koshik, the German community and the Russian-German community in Berlin, Lichtenberg, Germany.

The goals of the exhibition are to show Germans’ history and the extensive contributions they made to the development of Kyrgyzstan to the German public. It wasn’t a coincidence that Detmold was chosen to host the exhibition, since many Germans who moved from Kyrgyzstan to Germany live in Detmold and the surrounding area. The Russian-German Culture and History Museum in Detmold is considered to be one-of-a-kind in Germany; it contains unprecedented materials and archives on the history of immigration of Germans to Russian territories and Central Asia. The exhibition in Detmold was held in the museum due to the support of Henry Tsertik and his Initiative. Henry Tsertik, a parliamentarian representing Budesliga and an ethnic German who emigrated from Kazakhstan, is the only German parliamentarian to come from the Germans who lived in the former Soviet Union.

The commissioner of the museum, Vitalis Hagelgans, delivered a speech welcoming the guests. The exhibition in Detmold was organized with the support of Burgomaster Rainer Heller. “Geographically, Kyrgyzstan is far from Germany, but the Germans who have come from Kyrgyzstan have created a link between the two countries,” Heller said at the opening of the exhibition. Bundesliga parliamentarian, G. Tsertik, invited Kyrgyzstani-Germans to carefully preserve and expand relationships with Kyrgyzstan.

“Germans have created bridges between the Kyrgyz and German people. They have made great contributions to the development of Kyrgyzstan, and continue to make contributions,” the Kyrgyz Ambassador to Germany, E. Otorbaev, said. The Ambassador made special mention to Kyrgyzstani painter Theodor Gertsen, sculptor Jacob Vedel, and other representatives of Kyrgyzstani-Germans. Their work will remain as great contributions to Kyrgyzstan’s history and culture. One wing of the Detmold Museum is dedicated to Vedel’s sculptures and Gertsen’s work.

Ambassador Otorbaev spoke about the successful work Kyrgyzstan’s German Advisory commissioner Valeri Dil has had working with Germans’ issues in Kyrgyzstan. The Ambassador expressed his gratitude at the opening ceremony at the Detmold Museum and to the head administration for the organization and presentation of the exhibition at August-Herman-Frank Gymnasium School.

During the event, theologian Jacob Tsvaininger, a German from Kyrgyzstan, gave a report on the freedom of religion. He emphasized that Kyrgyzstan is an oasis of freedom, where every person has the right to his or her religious beliefs. Museum director Katarina Noifeld delivered a short excursus on the essence of the exhibition. A photo-portrait exhibition was also shown at the event with photos by Kyrgyzstani-Germans living in Germany.

A beautiful and immaculate Kyrgyz yurt was set up at the opening ceremony of the exhibition with the support of the Kyrgyz Republic Embassy in Germany and the Kyrgyz Diaspora in Germany representative Guliya Fritche. It served as a great point of interest for those who came to the exhibition and for the residents of Detmold. The flavors of Kyrgyz national dishes prepared by representatives of the embassy underscored the event. Germans from Kyrgyzstan offered guests delicious paloo cooked in a large iron pot, or kazan, in the Kyrgyz tradition.

Kyrgyz and German songs and melodies were added at the ceremony by gymnasium school musicians. Nearly 400 people in total attended the opening of the exhibition. The ceremony was continued with pleasant memories and perspectives on life and labor in Kyrgyzstan for Kyrgyzstani-Germans in the land of their birth. Many members of Detmold’s local JMK attended the event as well.

The exhibition in Detmold will remain through January 31, 2016. The exhibitions are organized in partnership between the Kyrgyz Embassy in Germany and German partners and are being held for the purposes of informing people on the history of the relationship between the two countries, and to expand cultural activities between Kyrgyzstan and Germany.