«At the highest peaks of Kyrgyzstan the laughter of children rang» 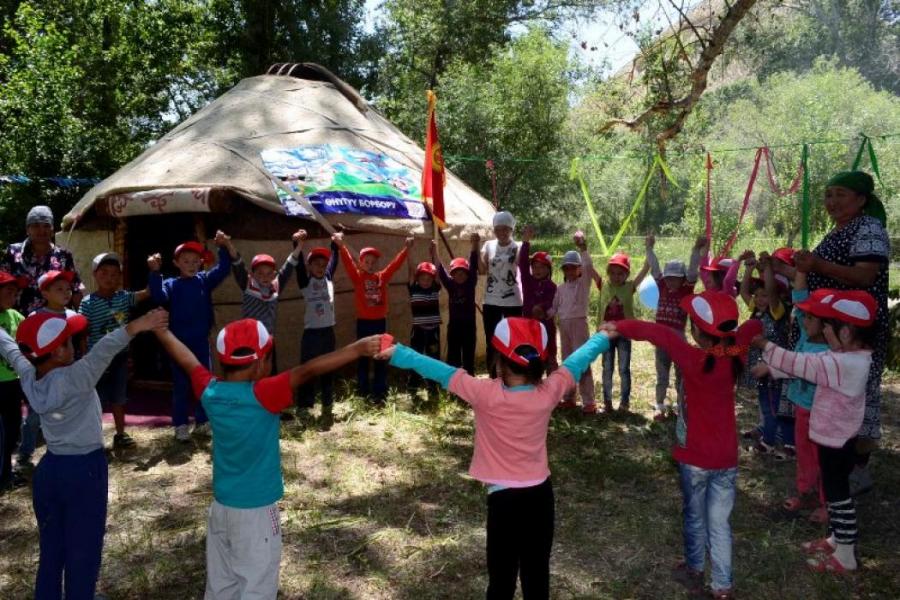 From July 27 to August 3, 2015 a working trip of the WPF "The Roza Otunbayeva Initiative" was held in the kindergartens on the jailoo-development centers in the Osh and Jalal-Abad regions.

The unique beauty of the great Alai, its sublimely majestic mountains and the celestial beauty of the local nature and the concentration of fertile valleys and healing medicinal springs, and favorable climate are the most important comparative advantages of this area that you cannot cease to admire.

Bugu-Bash - the highest mountain peak, where the kindergarten is opened on the jailoo in Kyrgyzstan. It was opened by Nazaraaly uulu Cholponbaev - one of the parents of a kindergarten pupil. He allocated for this kindergarten a yurt of his father.

Foundation staff also got acquainted with the lifestyle of active women-seamstresses, masters from Alai and Chon-Alai. Almost every family has a seamstress, who make beautiful kuraka, thermal and embroidery.

In the kindergartens, the Executive Director of the Foundation, Kendirbaeva D.S., read fairy tales for children, conducted interviews with parents about the values of child development from an early age and Masaru Ibuka presented the book "After three it's late." An employee of the Foundation, Mamayev Begaiym, held a master class on origami, and launched paper planes into the sky with the dreams and wishes of children. Boronbaev Azhimamat Zhusupovich (Associate Professor of the Faculty of Philosophy of Osh State University) and Aytbek kyzy Saadat (Officer of the Fund) conducted master classes for strategic games and games with dance elements.

I especially want to acknowledge the work of the group of four teachers, who on 1 July of this year, according to the age characteristics of children will hold various workshops, educational interactive games and art therapy in all kindergartens on the jailoo centers of Jalal-Abad region. The group's work is carried out under the supervision of a candidate of pedagogical sciences, director of the College of Education at the Jalal-Abad State University (Jalalabat State University) - B.M. Turdubaeva. In the kindergarten on the jailoo Saz, of the Suzak district, a group of teachers and employees of the Fund carried out joint training and development programs with children.

Significant support for the kindergartens on the jailoo-development centers are supported by local governments, Bakai Bank, CJSC "FINCA Bank", CJSC MFC "Financial group Companion", which provide the necessary materials (stationery, books, toys) and training for the full functioning of the kindergartens.

In all the frequented kindergartens stories were transmitted by radios and records in the Kyrgyz language from the fund "Tales of the world" Public Broadcasting Corporation (PBC).