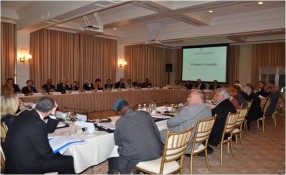 On 17 December 2012 in Little Rock, Arkansas, Kyrgyzstani Ex-President Roza Otunbayeva took part in the work of the Club de Madrid 2012 Annual Conference. Ms. Otunbayeva has been a full member of the Club of Madrid, which unites 92 former heads of state.

This year theme of the Club de Madrid 2012 Annual Conference was “Harnessing 21st Century Solutions: A Focus on Women,” and was held in the William J. Clinton Presidential Center.

In the morning of 17 December, Kyrgyzstani Ex-President Otunbayeva took part in the work of the Club de Madrid’s General Assembly, the organization’s highest governing body. In the course of the meeting, the organization discussed and approved 2012 annual report was and the working plan for 2013 as well as ratified the membership of five new members, including the Ex Presidents of Switzerland and Finland, Micheline Calmy-Rey and Tarja Halonen respectively.

In the course of the Club de Madrid’s Conference in the afternoon, Ms. Otunbayeva took the stage as one of the speakers in a special discussion session on women’s issues side by side with American Ex-President Clinton, Spanish Ex-President Gonzales, Mozambican Ex-President Chissano, and Irish Ex-President Robinson. During the discussion the participants shared their experience and opinions on the role of women as well as government actions for the advancement of women in their countries.

14-15 December 2012 — In anticipation of her trip to Little Rock, the Ex-President Otunbayeva took part in a series of meetings in Washington D.C., including with Ms. Nancy Brinker, Founder of The Susan G. Komen Breast Cancer Foundation; Ms. Ana Revenga, Director of the Poverty Reduction and Equity group at the World Bank; and Mr. Jeorg Frieden, Executive Director of the World Bank. In the course of the meetings many topics were discussed in connection to the current activities and the role of Ms. Otunbayeva as Ex-President and Founder of the “Roza Otunbayeva Initiative” International Public Foundation.

In particular, during the meeting with Nancy Brinker, the possibility was discussed of further cooperation between The Roza Otunbayeva Initiative and the Susan G. Komen in the fight against breast cancer in Kyrgyzstan. During the meeting with representative of the World Bank, many topics were touched upon with regards to cooperation in the area of education, health, and gender development. Ms. Otunbayeva informed those she met with of the initiative to introduce a mandatory year in the nation’s schools for preschool aged children. Questions of possible cooperation in the field of education utilizing innovative information technology were discussed with the Microsoft Corporation. Microsoft’s Senior Director of Trade Policy and Strategy, Dorothy Dwoskin, and Academic Program Manager, Allyson Knox, stated their readiness to look into areas of possible cooperation with the “Roza Otunbayeva Initiative” Foundation.

Questions of the necessity in strengthening parliamentarianism in Kyrgyzstan, in particular the conducting of a conference on developing parliamentary democracy in Kyrgyzstan, were discussed on 14 December during a meeting with Carl Gershman, President of the National Endowment for Democracy, and Robert Blake, US Assistant Secretary of State.

On 15 December a separate meeting took between Ex-President Otunbayeva and representatives of unions and associations of Kyrgyzstanis in the USA. Representatives of the Kyrgyz-American Alliance, KG Club and Kyrgyz Salam took part in the meeting.

During the meeting, Ms. Otunbayeva told the Kyrgyzstanis about the main initiatives of her Foundation, including those aimed at the support and development of expatriates. Opinions were exchanged with regards to possible cooperation between The Roza Otunbayeva Initiative and Kyrgyzstani organizations in realizing humanitarian, social and economic events, such as the annual Mekendeshter forum.