«Profil es of courage» by John F. Kennedy is in Kyrgyz language 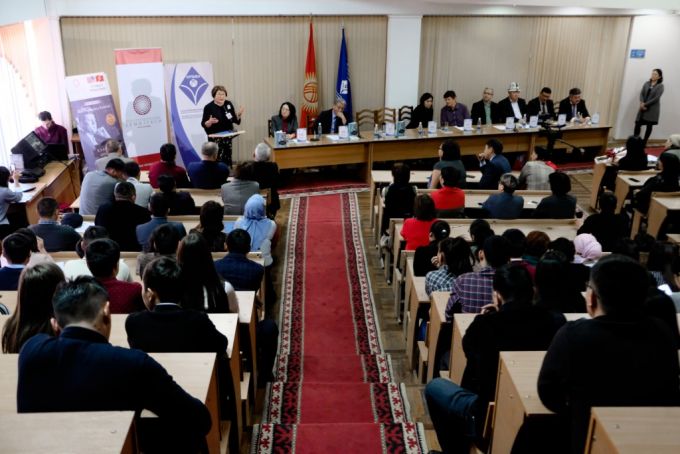 The book by John F. Kennedy, “Profiles of Courage” was translated into the Kyrgyz language. Its presentation took place at the Presidential Academy of Administration of the Kyrgyz Republic on January 30. The translation from English into Kyrgyz was made by the well-known translator, historian, and journalist Tynchtykbek Chorotegin.

Speakers of the presentation noted that this book teaches that the state and national interests always stand above the interest of the political parties and personal interests. The politicians and senators described in the book have always been distinguished for defending the truth, the country's interest in spite of all difficulties. They were not afraid to defend their opinion, even alone against the absolute majority.

The book is available at the National and K. Bayalinov Libraries.

The translation “Profiles of Courage” was published by the “Roza Otunbayeva Initiative” IPF, within the books translation and publishing program by the US Embassy in the Kyrgyz Republic.

“Profiles of Courage” was written in 1956 by then Senator John F. Kennedy and has since been reprinted 50 times.

We will continue our work in a remote operating mode
Peacekeeping and peacebuilding issues are being reviewed in Geneva (Switzerland)
Invitation to participate in the 8th Festival of Education 2020 and the Fair of educational services
Bishkek celebrates «International Day of Women and Girls in Science»
Towards the 8th Festival of Education: Meetings with High School Students