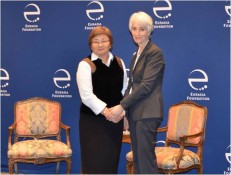 According to the Kyrgyzstani Ministry of Foreign Affair’s press service Kyrgyzstani Ex-President Roza Otunbayeva met with UNDP Administrator Helen Clark on 11 December 2012 in the course of Ms. Otunbayeva’s visit to.

During the meeting, discussion centered on the issues facing migrants, who comprise 20% of Kyrgyzstan’s population.

Ms. Otunbayeva noted the importance the UNDP-sponsored international conference of compatriots held in Bishkek. Additionally, she underlined the importance of further UNDP involvement in migrant issue as well as the development and realization of programs in support of Kyrgyzstani ex-patriots.

In particular, the creation of an online social network for Kyrgyzstani citizens and ex-patriots was proposed so that each group could continuously cooperate and communicate.

Both parties also discussed the question of microfinance, the development of regional trade in Central Asia and the creation of the necessary infrastructure, as well as the issues of pre-school education

Ms. Clark welcomed the presentation of the 2012-2017 Kyrgyzstani Sustainable Development Project and noted that the UNDP is ready to actively participate in discussions of the project.